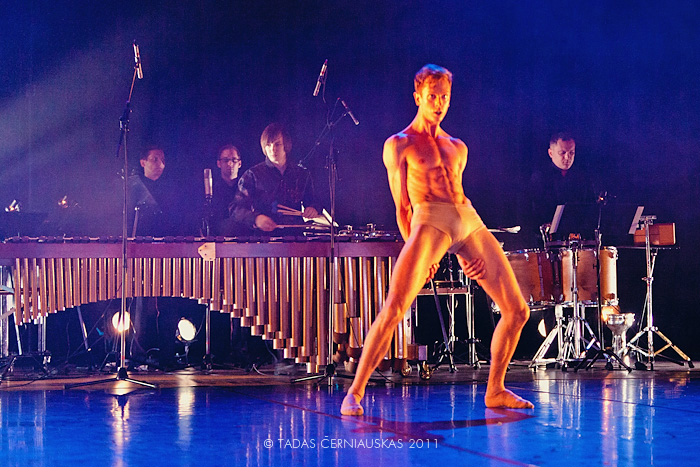 “It is a performance about man’s loneliness which is portrayed by various colours of dance. What does a man look when he is lonely? How does he behave when he falls in love with no response? Does he become hatefull or vindictive? We were trying to find out why, in these circumstances, the ideal and well spring of man and woman changes, and who, actually, suffers from this? Moreover, does anybody care about this at all?”, – asks Marija Simona Šimulynaitė, the director and choreographer of the performance.

According to the director, the dance reveals the entire palette of a man’s feelings. It talks of loneliness and sadness, love and pride, peaks and troughs. Different artistic improvisations, everyday reality and observations help to create and construct the performance. In addition, the male dancers’ suggestions and advice were taken into consideration during the process of the dance‘s creation. “When you are a woman and wish to create a work like this it would be strange not to search for men’s advice. How else can you talk about them, if you do not listen to their thoughts first?”, – adds the director.

„It takes a whole life for a woman to understand what a real man is. His picture has been changed many times throughout the different periods of history. The modern generation of boys look like cyber mice. They appear fragile and pale. One can see neither a knight nor an eagle anymore. A man no longer provides food and firewood. He starts raising children and becomes a homemaker. It appears as women take control; therefore, the understanding of what male is has changed enormously in the 20th century. A new kind of male has emerged and men have become princesses. They worry about the way they look more than about their inner world. How should a woman feel or what should she be when holding hands with this kind of man?“ – wonders Marija Simona Šimulynaitė.

Arkadij Gotesman is in charge of the music in this project. He has been described by art critics as an exceptional artist. Many people simply call him a jazz-man and a virtuoso of percussion. However, it is quite hard to exactly define what his main art form is. Moreover, it seems that Gotesman does not care about this at all. It is obvious that he is an example of both action and practice and he is willing to try different challenges in various artforms. He not only performs in the diverse world of music, but also in theater and literature. It is worth noting that the biography of Arkadij Gotesman is as colourful as autumn. His list of works is enriched by cooperations with Oskaras Koršunovas, Lora Juodkaitė (a world famous choreographer), Lithuania’s Opera and Ballet Theater. Arkadij also focuses on creation in the world of cinema. His music played in the famous film “Geto”, and also in a film about Lithuanian Jews – “The Meeting”, which he is very much proud of. The silent movie “Casanova” is an example of his work with Ciurlionis String Quartet from Ciurlionis Art School. Not to mention various other solo albums, original plays and extraordinary music projects. Being one of the most creative percussionists in Lithuania, Arkadij brings to the stage a great amount of different instruments which definitely communicate the main idea of the performace, and do it in an extremely sensitive way.