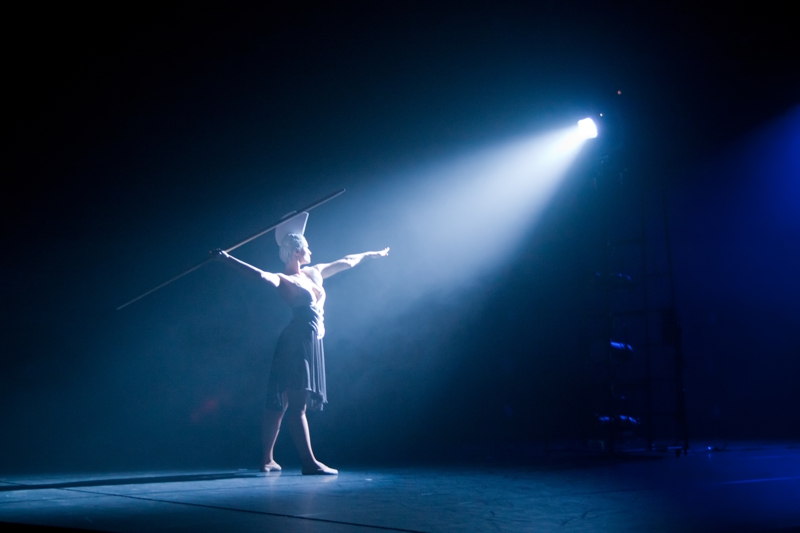 Based on Greek Myth of „Arachne“ (The spider woman), The Metamorphoses, Ovid.

The dance performance ARACHNE is a dance play based on Ovid‘s Metamorphoses. The myth tells the story of a young girl who was believed to be the best weaver and thought herself even better than the goddess Athena. One day the goddess, pretending to be an old lady, approached the girl and asked her to atone for her behaviour. However, the girl not only showed no fear, she even challenged the goddess. Athena accepted the challenge and, of course, proved herself to be the better weaver. Arachne felt extremely guilty and was about to end her own life, however, the goddess feeling sorry for the girl turned her into a spider.

This myth communicates the eternal truth that pride is a vice. Pride is a dangerous weapon which drags people towards moral suicide. They hide behind their masks of pride, yet they do not realise that at the end of the day they will destroy themselves. This central motif appears continuously throughout the dance play.

Arachne shares the same goal as other artists. She wants to identify herself with her profession. Every artist leaves a trace of themselves in every piece of art they create. Their thoughts and feelings as well as their physical bodies remain in every creation. In a similar way we can see how Arachne becomes a spider who will continue spinning webs for the rest of her life. A painter, a dancer or a writer share guilt, and this feeling helps them to edge closer to higher matters and divinity. God is the creator of the universe and every creator creates its own world. Arachne was very close to divine matters, however, her hubris led her to dare to enter Athena’s space. This insulted Athena, therefore Arachne was made to be a spider and became a creature which had a desire for spinning and weaving. Athena was graceful and decided to make Arachne a spider because she felt sorry for the girl. However, we can see that the spider is a symbol of the cosmic order. The form of the spider’s web can be compared to the symbol of the Sun and the radiation of the divine spirit. Why does Athena choose Arachne to be a spider and not a frog or a fly? Is there a deeper reasoning behind this? Is it a coincidence or a strategic move? We all know that Athena is a goddess of wisdom, strategy and war. Later she even becomes a patron of art, craft and science.

The dance performance Arachne not only visualizes the ancient myth, but also seeks to solve problems which are extremely relevant to modern society: pride, vanity, the competition of women. The different dance movements also exhibit themes influenced by the personal experiences of the creators of the performance.

Strong lights play an important role in the performance. They accentuate the fight scenes and competition – different spotlights suddenly become part of the play, acting and participating in the plot. This is definitely an original solution; one wherein pieces of technical equipment become real mythological creatures and act on stage.

Greek mythology is enriched with many supernatural creatures. This was the main inspiration for the set design. The rule that lighting should be invisible is broken. During this performance the stage looks as if it has been turned inside-out, and all the spotlights become visible and extremely important for the dance.